Read the real life accounts of peoples’ experience with Oralift. Everyone has muscles. Everyone responds. The response in the individual varies. These are some of our best results. These include genuine, non-professional photographs taken over a number of years.

Roos believes in the power of adaptation and enjoys swimming in the river in winter. The benefits of this to the immune system are well documented and this also improves circulation and helps reduce stress. Oralift was the way forward for Roos for a facial aging programme and all the associated health benefits that Oralift brings. Roos is a Holistic Health Coach and really supports the nonsurgical but natural way the Oralift works.

Darcy’s Story – Less can be more:

People with tense facial muscles have to go slowly with Oralift

Darcy, also known as Brazilian Girl on her You Tube channel is passionate about anti aging and was excited to try the Oralift device. Darcy had tense facial muscles and used to clench her teeth. People with tense muscles can find it difficult to get used to Oralift, but fortunately in a recent study, only 10% came into this category. 90% found it very easy to use. Oralift is for everyone!

"I believe that we can age beautifully without invasive procedures. To me, the fountain of youth is good skin. So when I read about Oralift, I thought, this is unlike anything I've ever seen! When you read the information about how the Oralift's technology works, it all makes sense because it is working with the natural processes of our body, not against it. I'm excited to see the results of this simple, yet complex and brilliant device! "

We were delighted when Claudia wanted to try Oralift and share her Oralift journey as it is happening. Claudia's outlook on life is "I am obviously not the biggest fan of pharmacological solutions to life’s problems. I strongly believe that many health goals can be achieved, and many diseases prevented or even reversed, by focusing on a nutrient dense diet, exercise and a healthy mindset". True anti aging comes from lifestyle choices and Claudia clearly believes in a healthy lifestyle. Oralift fits right into that and is why Claudia is so keen to try it. Let's follow her progress over the next four months.

Leda had read the book Breath by James Nestor and hoped that a device existed that could help with breathing habits. She had watched Claudia Glows’ video where she was talking to Dr. Nick about chronological and biological aging, and her own results with Oralift. Leda was excited to try this device for herself.

Rest periods do not mean that the improvements are lost

Cathy bought Oralift "to help with the horrible daytime mouth clench that I developed during COVID lockdown". She found that not only has this improved but Oralift helped her with another problem she had. About 30 years ago Cathy had an incident with her Labrador where her nose got injured. Despite going to see her ENT consultant, after her initial swelling died down, she suffered permanent damage to her nasal passage and her breathing went down to 20% and she adapted by mouth breathing. She found that using Oralift has helped her to breathe normally again. She says "Your amazing creation, has given me a miracle in my life”. These are Cathy's comments after the rest period: "I continue to see gradual improvements in my fine line and wrinkling, especially in the neck and eye area. I am amazed that the Oralift is still working, even during my rest Now see her 1year results!"

I was hoping such a device existed !

I’m excited to begin the journey because at 51, the signs of aging are starting to form. My jawline is losing definition (getting those saggy jowls) and fine lines and wrinkles are forming around the eyes. I’m not interested in invasive procedures but I am keen to try products that support my body’s natural functions. I’m fascinated by the benefits Oralift can provide and can’t wait to see the long term results!

16 years and still using Oralift! What other treatment could do this?

"I have been using Oralift for 16 years. At the age of almost 60, there isn't a wrinkle on my face and my lips are as full as they were when I was in my youth. They have not thinned at all. All these years I haven't used any Botox, fillers and not been near a knife. I will keep on using Oralift till I die. Thank you for inventing a wonderful device and in turn giving me the confidence to grow old gracefully."

Michele’s Story is also going to be in real time. Her story shows how flexible the programme can be. Now see her 4 month results:

Michele has a Medical Spa in Richmond Ontario where she specialises in skin treatments, but is always on the lookout for new cutting edge treatments to offer her clients. She wanted to try Oralift herself before including it on her treatment menu. Michele has been unable to open her Beauty Bar because of the current restrictions, but Oralift is the perfect treatment to do at home and Michele was able to do it when she had time on her hands. She was keen to see results and her programme shows that the Oralift programme can be flexible. People whose facial muscles are very relaxed can progress faster than the recommended programme, which has been designed for everyone but we are all individuals and there is flexibility within the programme.

Linda’s results are impressive but sometimes it can be difficult to appreciate them on your own face! Users are asked to provide a “wish list” of what they are hoping to achieve with Oralift. Linda’s main concern was her marionette folds and nasio labial lines. Linda’s photographs indicate a significant improvement in both, although Linda was unsure herself. Sometimes it can be difficult to appreciate what our own bodies can do. In addition, changes can be difficult to see when you are looking at your own face every day. At one point, Linda was thinking of giving up with Oralift but pointing out the improvements to her inspired her to continue.

Jane Mann is from the USA and had the Dentalfacelift procedure in Las Vegas. Jane is an aesthetician and her interest in facial aesthetics made her think on the lines of creating an device that could help patients whose teeth did not need to be restored.

Read Barbara's story in her own words of her Oralift journey: "Initially I found it quite difficult but I took it slowly and gradually as my muscles adjusted it became easier and I can see my face improving, more and more with every use. I am delighted with the results and knowing that my face, skin, hair and even posture will continue to improve is just wonderful and with so little effort."

How it stopped her clenching habit.

Federica is a beautiful young mother who was concerned about her clenching habit. When she heard about Oralift, and how it could help her stop clenching, she thought she would give it a try. The results were very positive! Not only did Oralift help Federica with her clenching, her face became noticeably more radiant and vibrant.

Lucila, a dentist from Brazil with a passion for facial aesthetics came to one of Dr Mohindra’s courses in London and fell in love with Oralift. She has introduced Oralift to many professionals in Brazil.

Sue is one of our long term Oralift users. She was feeling quite low having separated from her long term partner and wanted something to give her a boost. She was adamant that she wanted a natural treatment and has been delighted at what Oralift has done for her. See Sue's pictures after 7 years.

At Oralift we are often asked what is the best age is to start using Oralift. Olga at 24 was already a very attractive girl and her results show that it is never too early to incorporate Oralift into your beauty regime.

Surprised by a lighter skin

Farah is a flight attendant. Her wish list included the ageing triangle and smoother skin

Improvements in the rest period too

Nina had a very good result after 4 months. Many users are concerned that their faces will deteriorate in the 4 months recommended rest period. Nina's story shows that this is not the case.

Barbara initially used Oralift for 3 years before she has work done on her teeth - what we call the Dentalfacelift. She wanted to maintain her facial improvements with Oralift and has used it ever since.

Lizelle had come to London from South Africa. Although she was only 24, she wanted to see if Oralift could help with the sun damage to her skin. 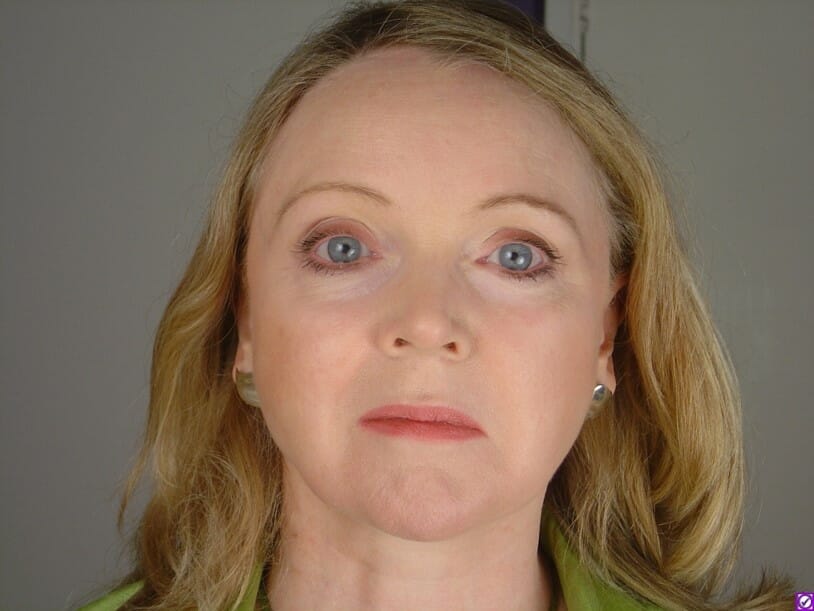 Carolyn was interested to see what Oralift could do for her. Her wish list was not specific - she just wanted a general improvement.

Story from the world’s beauty capital.

Korea is the beauty capital of the world and loves Oralift. This user is delighted with the results obtained after using Oralift for nearly 1 1/2 yrs

Jill has been using Oralift for 8 years

Jill read an article in a national newspaper about Oralift and had the treatment with a friend. As a long term user, Jill has shown that regular use of Oralift can indeed turn back time!

Wynne had been delighted with her Dentalfacelift treatment. Six years later she returned for some dental work and we explained that we were now doing another treatment, Oralift. When she realised it could have a similar anti ageing effect on the face, she decided to try this new alternative way to address the ageing process.

Christine was delighted that a natural treatment could produce these results so quickly.

Denise decided to have Oralift treatment, joking that she "wanted to look 35 forever"! In actual fact, she just wanted to see a general improvement but was a little concerned about the lines on her forehead.

Lauren came to London from Australia with one objective in mind - she wanted to see as much of Europe as possible for as long as her visa allowed. When she heard about Oralift she wanted to try it while she was in the UK to see if it could help with her severe clenching habit. At the start Lauren was only able to wear the device for a few minutes.

Katarina is from Finland and felt that she did not want to go down the usual treatment routes and wanted to try something that gave her a natural look.

All brides want to look their best on their wedding day, and especially in their wedding pictures. Jola reported after the wedding that Oralift had helped to make her feel and look her radiant best! "Thank you to Oralift for helping me to look great on my wedding day"

Patience paid off and a good result became excellent over time

Bridget's initial result with Oralift was good and she was happy but her continued use of Oralift resulted in a 5 star result over time.

Continued improvement during the rest period

Users often ask if their faces will revert in the 4 months rest period. If we look at the principle of the microtrauma theory, once the initial trauma has been created, the healing continues for 10 months. What we have found is that sometimes the best results are seen in photographs taken in the middle of the rest period.

The smile is not just about teeth and lips...

Nodlaig was delighted with her results with using Oralift which came with an added bonus.

Continued improvement during the rest period

Lynne had a good result after 4 months and as is often the case, the improvements continued during the 4 months rest period, when Lynne's result was impressive.

Ageing and our immune systems

Anti-ageing skincare techniques for the over 70s

Get in touch with us